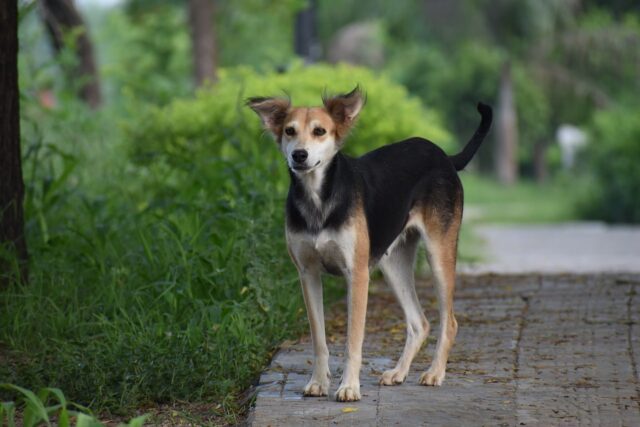 Thanks to sites dedicated to dogs and their rescues, we have seen how many dogs have been taken off the streets and given a new opportunity to live a better life. But the sad truth is, even with thousands of dogs being rescued from homelessness, tens of thousands more are being abandoned by their owners.

Like garbage, they are just dumped off on the streets and left to fend for themselves. One pup, in particular, was literally treated like trash and left behind by his owner inside a garbage bin. The people who found him were shocked that someone can do this to a helpless dog. The trash bin is located inside a city park in England. One of the park employees found the dog inside the crate. It was one of those that had high metal walls with a metal tin roof. The dog was medium-sized, and looking at him; it would seem difficult for him to go inside without any help. It was highly likely that someone placed him there.

Whatever the case may be, the dog certainly required help. He looked lonely and scared, and it seemed that it had been some time since he had a meal. The park authorities decided to call one of England’s oldest and most well-known animal welfare organization, the Birmingham Dog’s home.

Rescuers from the charity group picked up the dog and brought him back to their shelter. There he was looked over by a vet to see if he had any health issues. Aside from being malnourished, the dog was surprisingly in good condition. But his mental state was a different issue.

Aside from giving him nutritious food, the shelter staff had to teach him how to be sociable. They regularly play with him and show him once again that humans can be trusted. They hope that by giving him a good place to stay in, showing him care and attention, and providing good food, the dog would soon be ready to move in with his permanent family.