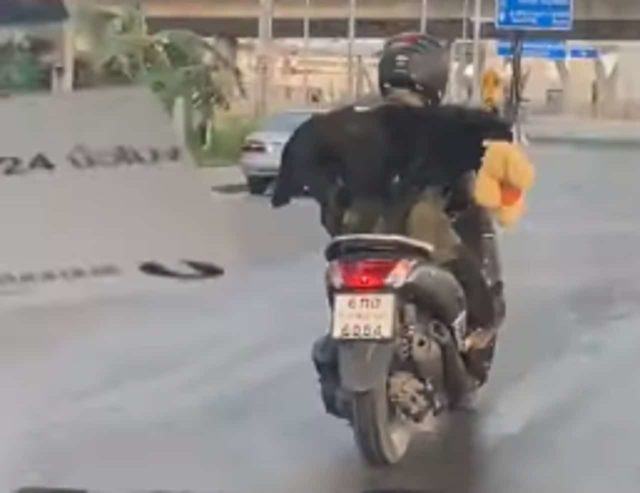 As such, a particular dog in Thailand rides on its fur parent’s motorcycle, but not without bringing its security object.

Wait, what’s that on the motorcycle?

In a video shot by a Thai motorist, one can see a black-furred dog standing behind its fur dad on a running motorcycle. Though it’s pretty much an ordinary scene (except for the dog standing without any support), a closer look reveals the entire scenario. As the dog calmly stands during the ride, the dog holds on to something with its mouth. Basing on the motorist’s tone of voice, the object the pooch’s holding provides one an amusing spectacle.

What? The dog brought a stuffed toy with it?

As the driver sped up to get nearer the motorcycle, the object in question’s finally clarified. It turns out, the pooch holds onto a medium-sized stuffed toy.

Despite the attention the dog’s getting from its neighboring motorist, it’s pretty oblivious to it. The pooch continued looking on ahead as if nothing unusual’s happening. However, the adorable footage’s coming to an end as the pooch’s fur dad maneuvered the motorcycle to another lane. Despite this, the pooch continued coolly standing on the two-wheeled vehicle while gripping the toy securely.

Though one can only speculate the reason behind the pooch’s action, such a novel sight ultimately caught the netizens’ attention. Even if some netizens voiced their concern for the dog’s safety, what the dog did in the video deserved to become an overnight viral sensation.

If you want to take a glance at the short but eye-catching scene, feel free to watch the video clip below.