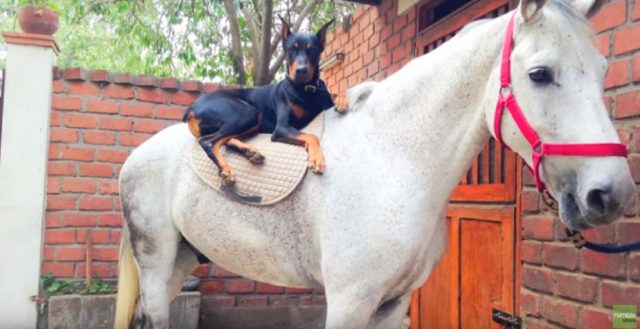 If you’re searching for a guard dog, perhaps one of the choices includes the Doberman. Though they’re tough-looking on the outside, this breed possesses the gentlest of hearts when interacting with their acquaintances.

With this, Boss the Doberman proves to us that they can befriend animals of another species, even if they’re bigger than them.

In this adorable video compilation, one can see Boss with a white-furred horse named Contino. Though their pictures look like they’re merely shooting for a magazine cover, the video snippets that follow prove to us otherwise.

Known as the “Horse Whisperer,” Boss managed to befriend Contino most fantastically. While other horses feel intimidated whenever dogs are around, Contino doesn’t flinch around Boss.

The pair enjoys spending their afternoons strolling together, with Boss excitedly leading the horse towards the field. The friendly Doberman tugs on the horse’s leash, egging his beloved friend to hurry.

I love you, Boss.

Once they’ve had their fill of fun, Contino and Boss head back to the stables. Boss then lies down on the hay to rest for a bit, but Contino decides to express his appreciation with some loving licks.

By the looks of it, Boss doesn’t mind the cheesy gesture as he allows Contino to do so. And, when the Doberman finds the right timing, he returns the affectionate gesture as well.

But, after the pair replenished their energy tanks, Boss once again urges Contino to take a stroll with him. Even if the horse’s busy cleaning himself, Boss eagerly tugs on Contino’s leash to make him hurry. Contino willingly accedes to Boss’ request and starts walking.

Though there’s nothing fancy with the pair’s routine, their loving interaction’s enough to prove that heroic deeds don’t define friendships. Even the simplest gestures and quiet moments can become one’s form of bonding with their best friend.

If you want to take a look at Boss and Contino’s daily adventures, check out the video link below.