Home Dog Stories Dog Loves His Mama’s Sweaters So Much That He Gets Stuck In... 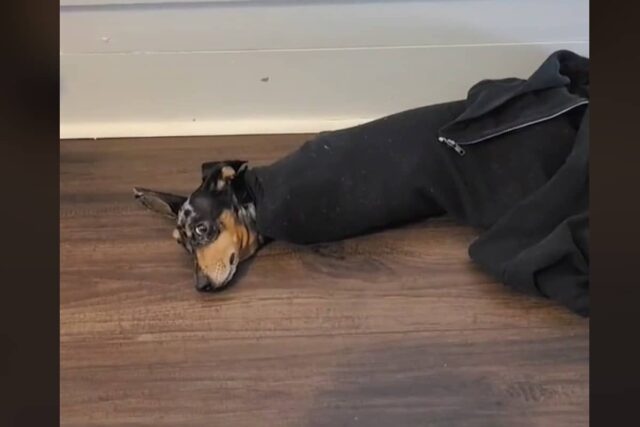 When Roger arrived in Autumn Nelson’s life seven years ago, he has been nothing but a sweet dog who loves to snuggle with everyone. Autumn shared that Roger loves climbing on the lap of whoever is near him, put his paw on each of their shoulders, and give them a huge embrace.

Autumn said that Roger is so affectionate that he enjoys playing and even snuggling with the family cats. Autumn shared that Roger is never short of affection that he looked as if he made it his life’s mission to feel cozy and be as cuddly with everyone as possible. Autumn recalled Roger’s favorite activity has always been to burrow himself to whatever cozy spot he sees. However, she noticed that her beloved dog has a new place he likes to bury his little body in, which turned out to be her sweaters.

Autumn recalled that Roger started doing that for the first time a couple of weeks ago. She heard Roger whining upstairs when she called for him to go outside, so she decided to check what was wrong with her dog.

Autumn found Roger stuck in her sweater. Autumn admitted laughing and documenting the funny sight before deciding to help Roger get out of the cardigan, while her dog stared at her with embarrassment and shame in his eyes.

Autumn said that Roger looked like a doggo burrito while being stuck in her sweater. She admitted that while she found it incredibly funny, Roger seemed to find it otherwise.

Autumn shared that she helped Roger get out of his predicament and thought that her dog would learn his lesson, but he got stuck again in her sweater two more times after getting rescued the last time. Autumn admitted she could not figure out why Roger suddenly became interested in her clothes, but she did not seem to mind at all.