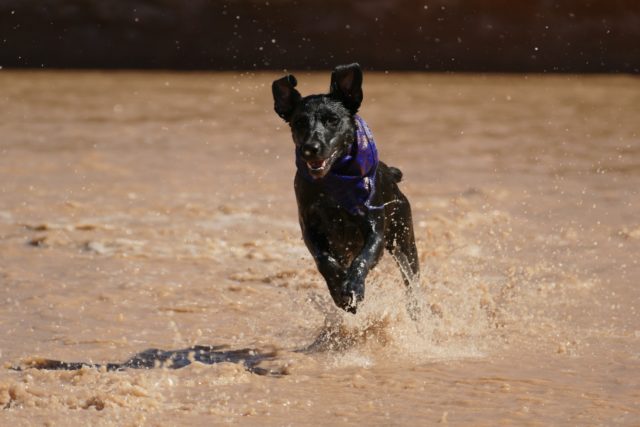 A five-month-old pup named Ellen had been living a hard life on the streets of Fresno, California when a local shelter finally noticed her and took her in.

However, by then, the pup’s health had deteriorated to such a point that the shelter director had to ask for help from Shirley Zindler, the president of the non-profit rescue group Dogwood Animal Rescue Project.

Besides being severely undernourished, Ellen was suffering from an advanced case of mange. She had several bald patches, and her skin was raw. Some spots were even oozing fluid. Even Shirley, who has rescued a considerable number of animals, was astonished by Ellen’s condition. The pup seemed to have resigned herself to a life of pain, and hopelessness was evident in her eyes.

This sadness spurred her rescuers to try their very best to make things better for the young canine. Ellen’s veterinarians set her on a course of medication to get rid of the mites infesting her skin, as well as antibiotics to prevent infection.

Ellen also got medicated baths every day to help her skin recover. Moreover, her foster mom fed her slowly to make sure her digestive system acclimates to proper nourishment once more.

Two weeks after Ellen’s rescue, new tufts of fur started growing on some of her bald patches. Many of the weeping sores on her skin have also dried out, so the pup doesn’t feel itchy all the time anymore. However, the most significant change that came over Ellen occurred inside. Her rescuers’ constant love and care transformed the pup’s demeanor; it’s as if she’s an entirely different dog.

The despair in her eyes is gone; she’s now a cheerful mutt who loves scampering around with her newfound canine pals.

It will take some time before her body completely heals, but with a sunny disposition and a bright future with many interested adopters, the once-neglected dog’s life has taken a turn for the better.

Watch Ellen’s transformation into an exuberant pup in the video below: