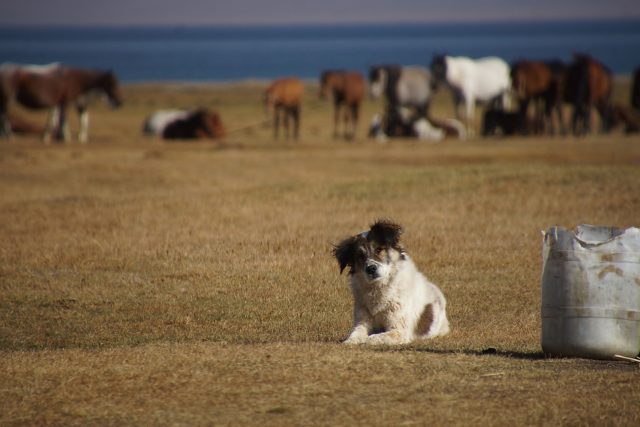 Sometimes animals get confused. There are cases when one animal would act like a different species. When this happens, it’s a barrel of laughs. One dog thinks he’s a horse, and that’s today’s story highlight.

Meet Doug, the dog. He didn’t always have the best life. Doug was rescued on the street when he was a mere puppy. Luck was on his side, and he ended up living in a foster home.

Doug has some bizarre but funny habits. He thinks he’s a horse. He will go to the stalls where the horses are and look at them. Doug will even start eating the hay. The bran mashes aren’t safe either. Doug is fearless, and it’s incredible.

His owner Cami Jendrzejewski works at the Orange County Fairgrounds. That’s why Doug gets to spend a lot of time with horses and ponies. The barn is where Doug grew up he got adopted. Dog likes to do things that horses would do, like doing rounds on a hotwalker.

All of the horses Cami owns are fond of Doug too. He even has a brother horse named Nigel. Doug and Nigel are best buddies. Nigel treats the dog gently and shows how much he loves Doug. When Nigel was brought to the barn from the United Kingdom, he was stressed. Doug was there with Cami to help Nigel adjust to the new environment.

Cami mentions that the best thing about Doug is that he’s never in a bad mood. Every day is a good day with Doug. This dog finds a way to make you laugh, and he’s wonderful according to Cami. She considers Doug as her soulmate and best friend.

When Cami brought in Doug, it was love at first sight. She said she’s only felt that with Doug and her other pets. Doug has been with Cami through tough times as well. Doug is a good dog.