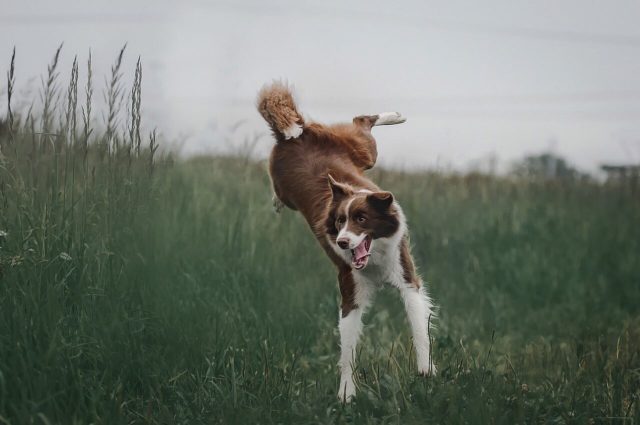 The Puli dog breed, which originated from Hungary, is known for its mop-like coat. Their long dreadlocks, which are technically called cords, naturally form as early as nine months old.

This breed’s coat may look bulky, but they are actually soft and woolly on the inside. The cords also protect the dogs and keep them warm all year round. Puli dogs are also quite high maintenance. Owners must keep an eye on their pup’s coat to make sure that there is no foreign debris stuck in it. Their cords also need to be separated and twirled by hand to maintain the locks.

Sally Watkinson is an expert in taking care of this breed since she doesn’t only have one, but two Puli dogs under her care. However, she was surprised to see a rather unusual critter clinging onto one of her dog’s back.

Sally was walking her dogs when she noticed a baby possum digging its way into one of her dog’s thick fur. The pup, who was named Kato, didn’t seem to care about what was going on.

Her husband, Jon, immediately looked for a wildlife rescue organization near them, but couldn’t find any. The couple went ahead and brought Kato to the vet so the staff can take care of the possum.

What’s interesting is, the same scenario happened to them the next day. Sally saw another baby possum attached to her other dog’s back while they were strolling.

Her other pup Hugo seemed to have noticed the marsupial attached to his cords, but again, he didn’t mind. They went back to the vet and handed over the baby possum.

The vet ensured that the possums would be surrendered to a wildlife rescue organization once they are well. The couple was also told to keep an eye for another one since possums usually have two to three babies.

Possums and dogs don’t usually get along, but Kato and Hugo knew that these babies needed help. Watch them in the video below!