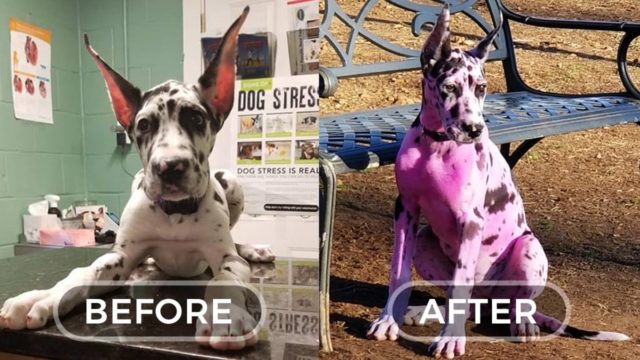 Big dogs, such as Great Danes, can get a bad reputation for being mean and scary. 21-year-old Jessica William of Fort Campbell, Kentucky decided to take a drastic step after she became tired of people being scared of her huge pooch, Drama.

Jessica owned four other Great Danes, and she noticed that people had been scared of every one of her fur babies over the years. To make people realize that these four-legged creatures are harmless, she got Drama, her adorable five-month-old Great Dane, an extreme makeover.

Jessica took Drama to the pet groomers and had Drama’s fur dyed in bright pink and purple. She even had Drama’s nails trimmed and painted in pink. Jessica was set back with a whopping $100 for Drama’s makeover, but apparently, the pampered canine is worth every penny. A dramatic change happened after the makeover. Before the cosmetic change, passersby will scurry away as soon as they come across the huge dog, but now Drama makes people stop and smile. Hordes of people, including kids, are now eager to walk up and ask Jessica if they can pet Drama. Her bright pink fur and pink nails speak volumes that she is not a threat, and she can’t do any harm to anyone.

What saddens Jessica is Drama’s eye condition, the fabulous dog is color-blind. The canine may not be able to see her colorful fur, but she brings color to Jessica’s life.

Acknowledging the positive feedback because of the transformation, Jessica swears that as Drama’s hair dye starts to fade, she is taking Drama back to the groomers to get it all done again. It will then be another spa day for Drama.

Jessica is proud of how everything turned great for Drama. As pictures of Drama went around and viral on the Internet, Jessica hopes she can change the stigma around Great Danes.