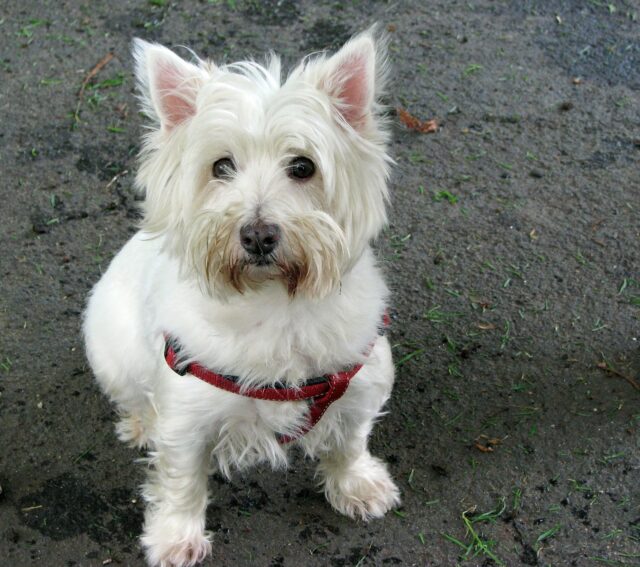 No one knows where Matilda came from, but for a few weeks, residents in Monrovia, California saw her everywhere in their neighborhood. She would either be near their church, school, crossing the busy streets, or hiding in the bushes. Concerned, some have tried to catch her and surrender to a shelter, but Matilda proved to be very cunning and elusive.

No matter how hard all the people there tried, no one could catch the stray dog. Many of them even posted photos and videos of the dog hanging around their community. Eventually, Piper Wood, the founder of Hand in Paw, a non-profit rescue organization based in Los Angeles, saw the Facebook posts and knew that she had to do something. Piper said that when she went to the area, some people said they saw Matilda near the school lot. She went there to investigate, and sure enough, she found the stray just outside the school building. She could tell that the dog was scared of her presence.

Matilda backed herself into a corner and stayed there. She was probably there for a while already as there piles of her waste just lying around her. As she tried to approach the dog, it started to shiver and stared at her. This time, matilda could not run away as she had nowhere to go.

Thankfully, she didn’t become aggressive. Piper was able to go near the frightened dog and put a leash around her neck. She then pulled the pooch close to her. When Piper picked her up, she could sense the dog’s body was very tense and rigid. A dramatic change, though, was about to happen.

When they got into her car, the dog’s demeanor changed. It was as if she could sense that she was safe now. As Piper was driving, Matilda relaxed and laid her head on her rescuer’s lap. She even tried burying her head into her arms.

Matilda started staying with Piper. There she was cleaned up, given a good place to sleep, and got all the love and attention that she could ever want. At first, Matilda showed signs of uneasiness, but once she got comfortable with her new surroundings, she became the sweetest dog there is.

Piper said that matilda is very affectionate and loves to cuddle. She always finds ways to get next to her. This is a good sign, which could mean that there won’t be difficulties finding her a good home.