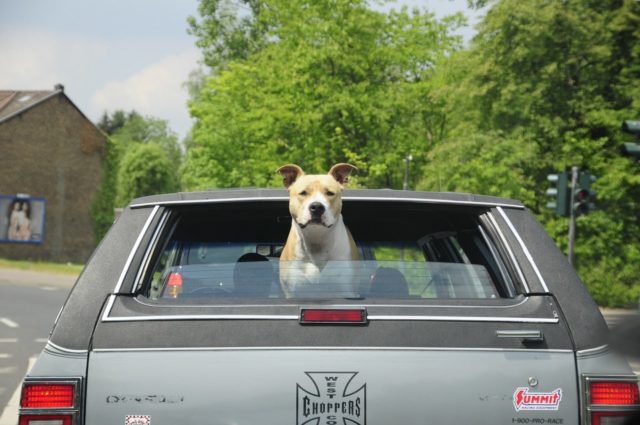 A pit bull named Ashley used to have little hope that her life would get better. She lived in a crack house on Staten Island, doing her best to quiet her growling belly.

One day, the residents simply packed up and skipped town, leaving the pittie to her own devices. The weather was frigid, and there was neither food and water in the house. In a few days, the dog would have frozen to death or died of dehydration.

Thankfully, someone called No More Pain Rescue to inform them of a pit bull who needed help. Rescuers Michael Favor and Erica Mahnken, who founded the organization with their friend Lara Ribeiro, rushed to the drug house to save Ashley. As expected, Ashley was emaciated; her ribs were sticking out of her skin. Cigarette burns also marred her coat — it would seem that the people living with the pittie cruelly used her as an ashtray.

Since Michael and Erica were in a hurry to reach the crack house, they weren’t able to make plans regarding where Ashley could stay while she recuperated. Fortunately, the two had friends at the Lower East Side fire department, also known as “Fort Pitt.”

The firefighters had housed a rottweiler before, so they were no strangers to looking after a dog. They agreed to give Ashley a temporary home. However, the sweet pittie quickly stole the hearts of the firefighters, jumping on them and giving them kisses as soon as she met them. Just three days later, the fire department called No More Pain to ask if they could keep Ashley for good.

Now, the pit bull is living her best life at Fort Pitt. She loves hanging out in the kitchen, enjoying the smells of cooking food. Ashley also gets to accompany the firefighters when they’re responding to an emergency. She even has a designated nook in the fire truck!

Erica and Michael, who make sure to drop by Fort Pitt when they’re in the area, are grateful to the firefighters for not hesitating to give the pooch a forever home. Watch Ashley cuddling with her human in the video below: