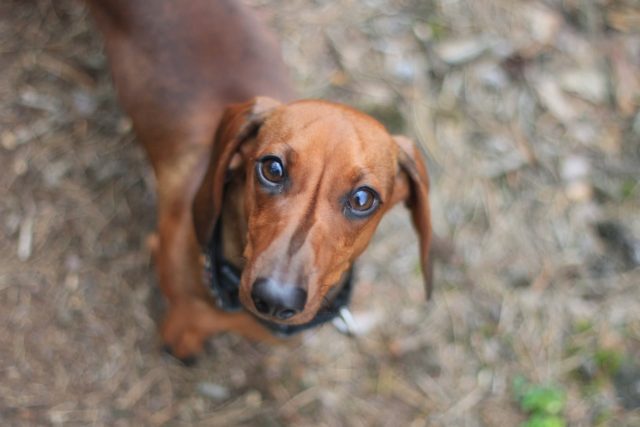 Takis Proestakis is a former businessman who is now running an animal shelter in the south of Crete in Greece. One day, he was driving back to the sanctuary in Ierapetra with a new rescue puppy when he chanced upon a skeletal dog scrounging for food in a massive pile of rubbish.

Of course, Takis couldn’t just pass the dog by, so he stopped to fetch her. She was so emaciated that he effortlessly picked her up with one hand. As soon as he put her down, however, she ran back to the mountain of trash.

The pooch wasn’t afraid, though; she was just so hungry that nothing else mattered but the bits of food she seemed to have found among the refuse. Takis brought her back and placed her in a crate at the back of his car so he could drive her to the shelter along with the puppy. As soon as the rescuer put a bowl full of food in front of the mutt, whom he decided to name Cris, she scarfed it down eagerly.

He had to take away the food bowl for short periods as Cris was gobbling it up so quickly that she might give herself indigestion.

From that day on, the canine was starting a new and better life. On Cris’s first night at the shelter, she slept on soft and warm blankets for the first time. The skinny dog must have slept soundly, knowing that she’s safe and she no longer had to content herself with scraps. She was around two years old when Takis found her, but she only weighed five kilograms. However, she soon gained weight as she kept eating during her first few weeks at the shelter.

When she’s not eating, Cris enjoys running around, enjoying the fresh air and sunshine while playing with the other shelter dogs. She’s an affectionate dog and loves cuddling with Takis, but she never wants to miss out on having fun with her furry pals.

Watch Cris and the rest of Takis’s dogs in the video below: