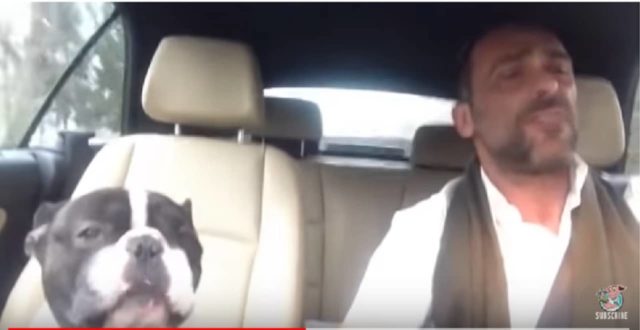 Every dog lover knows how canines respond to music. Just like their fur parents, dogs can’t help but dance and move in sync with the music.

But, unlike most dogs who sway their booties to the music, a particular French bulldog in Germany chooses to sing along to Rihanna’s iconic song.

In this fantastic video shot in Germany, Junior, a French bulldog, sits quietly beside his driving fur dad. However, when the strains of an acoustic rendition of “Diamonds” started playing on the radio, the pooch can’t help but look at Dad. Dad can’t help but smile and pat the pooch on his back as if permitting Junior to do what he wants. But, as Junior’s still hesitating, Dad starts belting out the lyrics of the song.

As Dad sings, Junior can’t help but stare in awe. Inspired by Dad’s move, the pooch finally decided to join and belt out a few musical howls of his own. While Dad progresses to the song’s chorus, Junior answers with a howl or two as well. It’s as if Junior effortlessly took the role of a second voice in their duet, answering Dad with some powerful tunes of his own.

The two continued singing harmoniously until the pooch decided to take a quick break during the second half of the song.

Let’s resume in three, two, one!

After taking a quick breather, Junior joins Dad in the second chorus. But, unlike the initial hesitancy, Junior now howls in sync to Dad’s singing, creating a beautiful duet. Dad can’t help but beam at his pooch, happy to see Junior enjoying the song. The adorable singing pair carried on belting their hearts out until the song came to an end. Though there were points where the pooch didn’t howl along, Dad couldn’t ask for more from Junior’s fantastic performance.

Try taking a peek at Junior’s powerful singing in the video below to witness everything the pooch did.