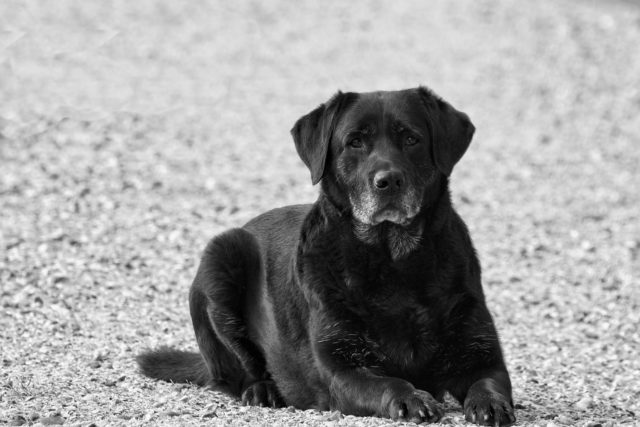 One senior dog beat the odds and survived the tidal currents of the Port Washington Narrows in Bremerton, Washington.

Nobody knows how the black Labrador got there or if she had any owners, but a boater saw the dog, whose name is Buttercup, trying her best to stay afloat in the middle of the channel despite her exhaustion.

The waterway spans a length of almost half a mile in certain spots, and tidal currents can go as fast as 4 miles per hour, so the canine had her work cut out for her. The boater tried to lift Buttercup into his boat. Failing to do so, he called emergency services.

Animal control officers fetched the Labrador from Evergreen-Rotary Park on the west side of the Port Washington Narrows and promptly brought her to Kitsap Humane Society for a medical checkup. When veterinarians examined Buttercup, they discovered just how determined she was to survive.

They found a baseball-sized stone in the Lab’s bladder, so it was likely that Buttercup was enduring a lot of pain even as she struggled to keep from drowning. Fortunately, after the vets removed it, the senior Lab recovered quickly.

A couple named Nina and Ash Henderson saw Buttercup’s photo on the Kitsap Humane Society website and were touched by how “heartbroken” the black Lab looked.

When they learned of how Buttercup survived her ordeal, they were even more determined to give her a new home. “It’s a miracle,” Ash says of the canine’s perseverance. Now that Buttercup has a loving family, she no longer looks downtrodden. She happily shares her Lake Tapps home with another Labrador called Buddy. The two pooches love playing with their toys on the lawn, and Nina spoils them with lots of treats.

They also gave her a new name. She’s now known as Sophia Petrillo, named after a character on one of Nina’s favorite shows, Golden Girls. The couple calls her Gigi for short.

According to Nina, it didn’t take long for the Labrador to acclimate to her new home. “She fits right in,” she shares, as if Gigi has lived with them all her life.

You can watch Gigi in her new home here: