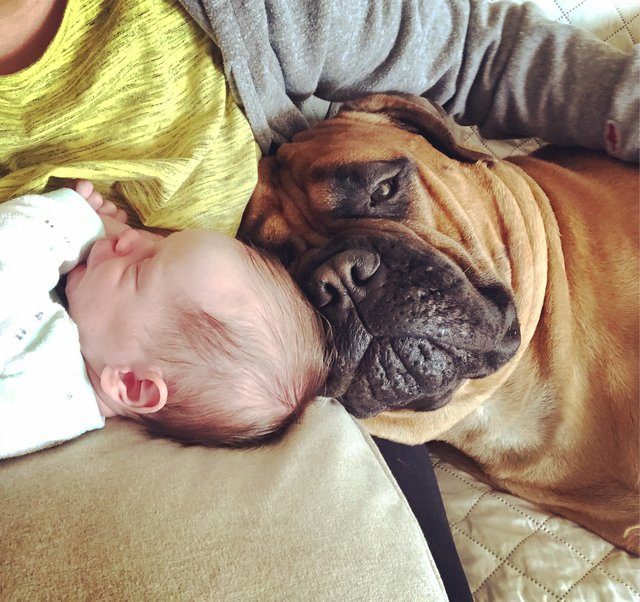 To say that dogs are amazing is an understatement. The breed has proven time and again that they are one of a kind. Our four-legged friends have added color and meaning to our lives.

A couple from Northern California can attest to just how much Brutus mean to their little family. Brutus is a two-year-old Bullmastiff, a self-appointed babysitter to his newly born baby brother. Bonnie Michalek and her husband had Brutus ever since he was born two years ago.

The couple said Brutus has a natural destructive behavior towards his toys, all except for a small yellow fluffball. Bonnie also added that for some reason, Brutus couldn’t bring himself to destroy this sacred toy. Regardless of the behavior, the couple would confirm just how much loyal and gentle Brutus is.

According to Bonnie, Brutus knew she was pregnant even before she did. The gentle dog sensed the pregnancy before anyone does. Brutus became very protective of Bonnie – also refusing to live her side when Bonnie’s husband has to work on some nights.

From Bonnie’s accounts, we can see just how much Brutus is excited to have his own ‘human.’ Despite the mastiff’s destructive behavior with his toys, the Michaleks are confident that Brutus would be an excellent companion to their newest family addition to their family. Bonnie added that Brutus loves kids. He gets excited every time he hears kids outside playing.

When Bonnie gave birth, Brutus has to live with her parents. Therefore we can only imagine Brutus’ excitement in meeting his new baby brother. When the day finally arrived, Brutus was so happy to see his family, that he completely bypassed his daddy to meet the little Kayden. From that moment on, Brutus takes his babysitting role very seriously. Every time Kayden starts crying, Brutus would present his favorite fluffy yellow toy to his brother. Brutus just showed everyone how much he loves his baby brother.