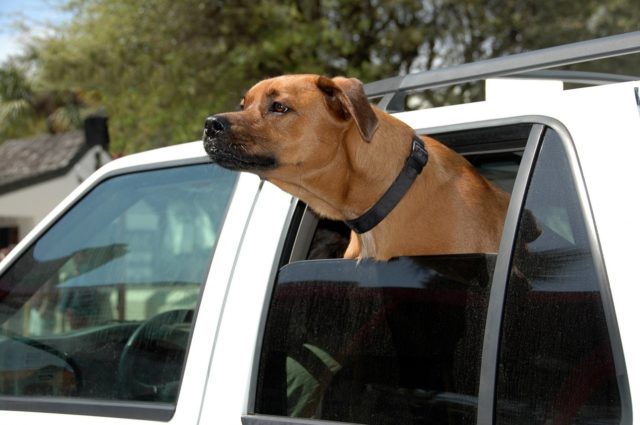 Adam Herbough from Roaring Spring, Pennsylvania went for a walk together with his two dogs. He would never have thought that he’d be coming home with three dogs.

Herbaugh was strolling around the local YMCA when he heard a chiming sound coming from his back. He turned around and saw a big brown coonhound walking alone. The dog has a collar that’s noisily rattling with every step that he takes.

He jokingly asked him if he wants to come home with them. Surprisingly, the dog seemed to have listened and walked home with them. Herbaugh thought that this was someone’s lost dog, so he brought him to Companion Animal Hospital.

The dog was scanned for a microchip. That’s how they learned that the dog’s name is Jake. His owner is from Phoenix, Arizona, which was more than 2,000 miles away from them.

The hospital staff contacted A Darrah Bull Bully Rescue to ask for help. The rescue’s president, Renae Metz, couldn’t believe how far the dog had come.

Jake disappeared from their family’s backyard. He’d been missing for almost a year and a half. His family doesn’t know anyone from the east coast, said Metz. So they could only guess how Jake managed to cross the country alone.

Because Jake’s owners just had a newborn baby, they can’t make the long trip to pick him up. So, the rescue team happily took on the challenge of bringing the dog back home. Metz’s sister who is a transport coordinator planned Jake’s trip back to his family. They looked for qualified volunteers on Facebook for each leg of Jake’s trip.

Jake wore a t-shirt that says “Arizona Or Bust” as he hit the road back home, this time with the help of the rescuers. Jake traveled through different states before reaching home. He met many people on his way. With each handoff, a new name is added to his white t-shirt.

It took him three overnight stays, 20 drivers, and 30 stops before getting reunited with his family. The volunteers who helped Jake on his travel shared photos of their road trip on Facebook. Jake was smiling and giving each of his transporters some kisses as if he’s saying thank you.

Now, Jake is safe back at his family’s arms. Jake’s experience is proof that microchips are a valuable tool in reuniting lost dogs with their owners, Metz said.