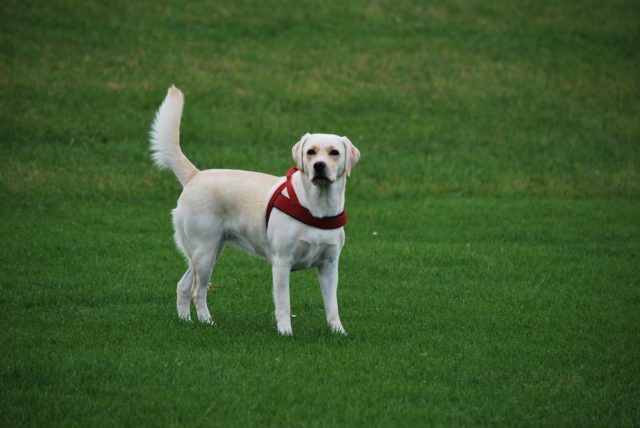 A neglected Labrador named Beaux who has a congenital facial deformity got a new lease on life after someone took a photo of him by accident.

Beaux was born to a breeder. Because he had an unusual face, no one wanted to buy him, so the breeder gave the Labrador away for free.

His first owners did not take good care of Beaux. For five years, the canine was left outside in their yard, starved of human touch and affection.

One day, they decided to move, and they didn’t want to take Beaux with them. Luckily, a woman named Jamie had a friend who had done landscaping work on the owners’ yard. The friend took a photo of their work and showed it to Jamie. In the background was Beaux, whom she thought was adorable. When Jamie learned that the Labrador was looking for a new home, she offered to take him in.

The extent of the neglect Beaux suffered became clear when Jamie brought him to the vet. The dog was emaciated, and because of this, the doctor thought there was only a 50% chance of Beaux surviving his heartworm treatment.

Jamie was determined to see the treatment through, however. She visited Beaux in the clinic every day to offer him her encouragement. When the vet called her in the middle of the night, she’d come in with no questions asked.

The Labrador surely felt the warmth of her love. Even as he was recuperating from his illness, he showed his new fur mom how happy he was to be around her. Beaux survived the treatment and went home with Jamie after a month. She had another challenge waiting for her—because the Lab lived all his life outside, he didn’t know how to behave inside a house.

The first thing Beaux did when he arrived was pee on Jamie’s couch. Still, she was patient, knowing what he’s experienced in the past. Fortunately, she had another dog named Riley who served as a best friend to Beaux and showed him how they did things around the house.

Under Jamie and her other dogs’ care, Beaux transformed into a different animal. No longer confined to the backyard, he’s now free to explore the world around him.

Beaux’s childlike wonder at all the new experiences he’s enjoying is a beautiful sight to behold, and it’s heartwarming to witness a dog who was once neglected living his best life now.

Watch Beaux’s story in the video below: