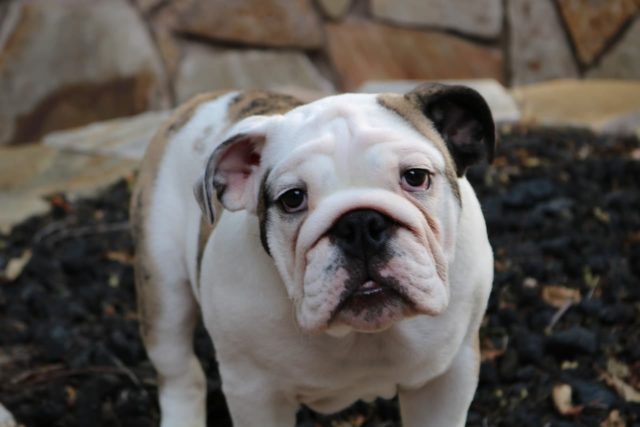 Rosebud’s story is of abuse and neglect. Rescuers believe that the English Bulldog was used by breeders and gave multiple births. Much like any puppy mill, Rosebud most likely stayed in a cage outside the house and received little to no love and attention. And when she was too old to bear children, she was merely dumped and abandoned on the streets.

Rosebud’s dilemma continued to grow. Despite being brought to a shelter, her situation grew worse. She was placed on a red list, which basically means that within 24 hours, she would be put to sleep. But a mad rush by a woman named Emma would change Rosebud’s luck.

Emma, a volunteer at Dogs Without Borders, learned about Rosebud’s predicament online. She saw that she had little time to save Rosebud, but she hopped in her car and rushed to save her. When she arrived, she immediately checked every kennel, looking for the neglected dog, and then she found her. Rosebud looked dirty, emaciated, and sad. Years of abuse took a toll not only on her body but on her mind as well. Emma took Rosebud to a vet to evaluate her and get medical treatment. They discovered that the dog hosted a lot of parasites, was severely malnourished, and a host of other health issues. She was prescribed medications, but they believe that most of her problems came from malnutrition. So they fed her and fed her until she gained weight and became healthy.

At first, Rosebud would just and sleep; she finally has the opportunity to rest her tired body. But as time went by, she grew more energetic, and her character changed. The changed dog started doing walks, and eventually, she ran. But more importantly, she has discovered how it is to be loved. Rosebud would now play with humans, and she seeks attention. She loved sometimes just to be assured that someone is taking care of her. Emma has gone through a lot, and now, she is ready to be a part of a loving forever home.