Home Dog Stories The Dog That’s Scared To Go Downstairs During The Day Because Of... 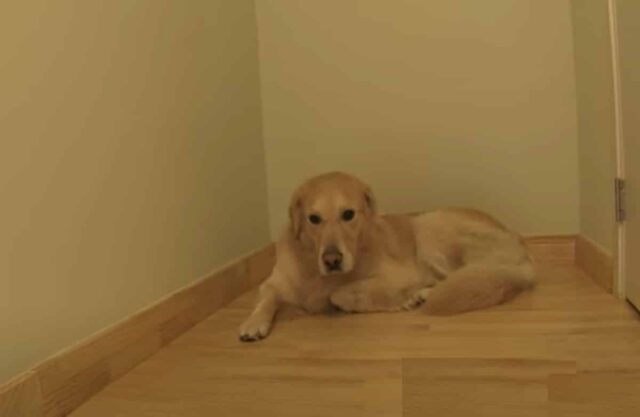 In Seoul, South Korea, a family lives in an apartment building with a Golden Retriever named Ttoli. Ttoli is a healthy and smart young dog. The family likes to spend time with him.

But Ttoli has a peculiar habit that baffles its owners. During the day, the dog doesn’t like to go down the stairs. It won’t even go down to eat or pee. The family sometimes tricks Ttoli to go downstairs by luring it with treats placed on the steps.

The dog is afraid of loud noises from planes

Ttoli would play downstairs with the family. But when the dog hears the sound of airplanes passing by, it realizes that it’s not in its safe place and quickly runs back up the stairs. The family understands that Ttoli is afraid of the loud sounds that jet planes make.

Unfortunately, the apartment building where the family lives is near an airport. Numerous planes usually pass by during the day. Sadly, Ttoli can’t seem to get over its fear of loud noises.

The only time that Ttoli does come down voluntarily is after sundown. During this period, planes no longer fly nor land at the airport. The dog eats and drinks heartily after fasting for the whole day. Ttoli transforms into a very active dog.

Knowing the limitation of their dog, the family likes to bring Ttoli outside the building to play. Ttoli gets to exercise during this period only.

The family sought the help of an animal behavior expert. They wanted to know just how they could help find a cure for their dog’s phobia. Luckily, they found such an expert in the city.

A friend can keep Ttoli’s mind off its fear

The expert brought another dog to the family’s apartment. Ttoli became curious with the newcomer. It went down to meet the new dog. But when a plane passed by, Ttoli ran back to the second floor.

A few times more, Ttoli was focused on playing with the other dog and ignored planes passing by. The expert and the dog visited the family a few more times until Ttoli no longer ran up the stairs while playing. After a few more days, Ttoli can go down the stairs and be active all day long.

Special thanks to SBS TV via Youtube for the image used in the story.