Home Dog Videos The Runt Of The Litter Grew Up To Be A Huge And... 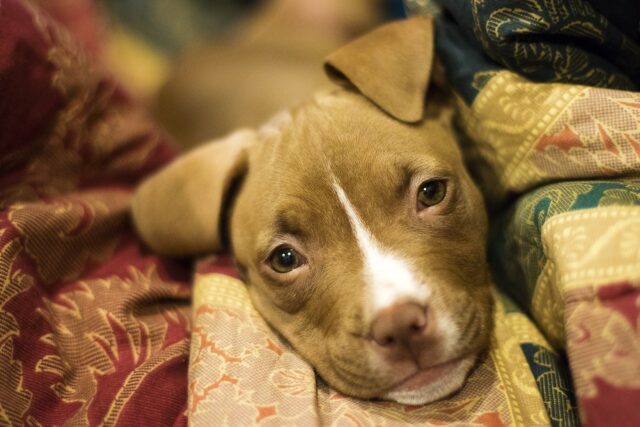 Miracles do happen. And when your fur baby is a miracle, you are doubly blessed.

Someone surrendered a pregnant dog at a rescue shelter called Wags 2 Wishes a few days before giving birth to her puppies. Guinness was the smallest puppy in the litter. Jess Vorberg, the operation manager at the shelter, took notice of Guinness. Somehow she knew that he was going to be out of the ordinary. The day after he was born, Guinness grew weak. His mother’s nipple was too large for his mouth, so he could not feed. He had a hard time breathing then laid very still. Jess immediately started to resuscitate him by pushing on his chest and breathing into his mouth.

Jess was nearly in tears trying to bring him back. Then a miracle happened. Guinness started breathing again. Jess got a heating pad to help stabilize his body temperature.

When Jess gave him a small bottle of milk, he started feeding. Jess was reassured that Guinness was going to make it. She got permission to take him home with her so that she could monitor his condition around the clock.

Then came puppyhood. It turned out that Guinness had a mind of his own and was very energetic. He brought fun and laughter to the family that Jess started to fall in love with him.

Jess gave hints to her family that she planned on keeping Guinness. She could not bear to part with the little guy. She made the adoption official when Guinness was two months old.

A year later, Guinness became a humongous, lovable Pitbull. He loved snuggles, especially with his Mom.

Guinness was very helpful to Jess when fostering kittens. He taught them things like drinking from a bowl and where to get the best naps. Guinness had a gentle way with them. It was as if he knew that fostering saved his life, and now, he could help save lives, too.

The Story Of A Stray Dog And Cat Becoming Good Companions