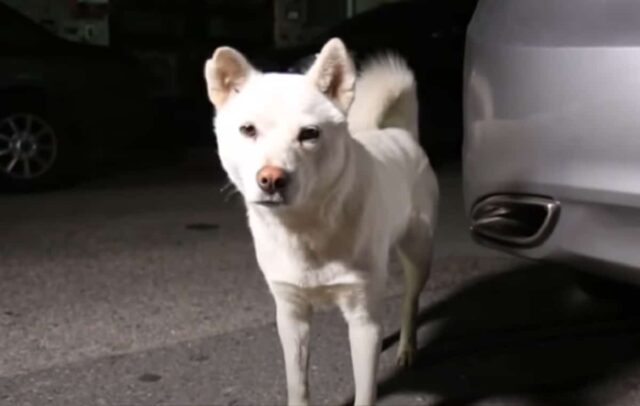 In a suburban area in South Korea, a stray white dog named Hindoong was wandering the streets. Hindoong looked for food around the neighborhood. The skinny dog quietly inspected the buildings and houses for any crumbs it may find.

After a few days, the dog chanced upon a black cat called Kkami, being friendly with some residents. These individuals happily gave food to the cat. The curious dog followed the cat around from a distance.

The dog follows the cat

Hindoong saw that the cat went to many places. The cat likes to visit a convenience store where the owner regularly feeds it too. At this time, Kkami began to notice the dog following it.

The cat does not stay in one place for too long. It likes to walk to another place often. This time it went to another store. The owner, as usual, had some food ready for the cat.

When Kkami walks away, Hindoong approached the store owner. The store owner took pity on the dog and gave it some food too. Hindoong realized that the cat could lead it to people that provide food.

Since then, Hindoong constantly shadowed Kkami. After a month of tailing the cat, residents noticed that Hindoong looked bigger and healthy. By now, Kkami likes having Hindoong around. Sometimes they walk side by side and hang around together.

The two animals became popular in the neighborhood. The community became very fond of Kkami and Hindoong. They want to do something to benefit both of them.

One day, the cousin of the convenience store owner adopted Kkami. As for Hindoong, the neighbors gave the dog a nice doghouse and placed it at a safe corner in the neighborhood.

The residents promised to take care of and feed the dog. People in the community hope that both Kkami and Hindoong would no longer need to beg for food to survive.

Special thanks to SBS TV via Youtube for the image used in the story.