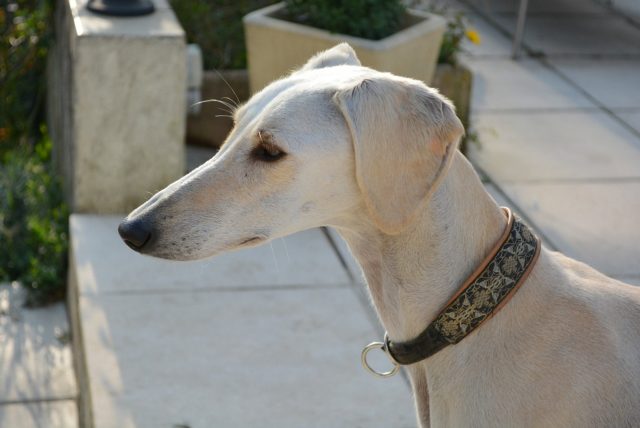 A lot of dogs end up in shelters because of being abandoned by their previous owners. However, one particular stray dog found in Ireland wasn’t just abandoned, but also showed signs of abuse that being around humans is something to be afraid of.

Angel, a lurcher, was found by a dog warden in Ireland. The dog warden called PAWS Animal Rescue stating that he was worried about the mental state of the dog if it was housed in a pound.

The rescue organization soon found out why. When the staff took Angel to the shelter, they found that Angel’s so fearful when around humans that she just sat in a corner facing the wall refusing to even look at her rescuers. No matter how much care the rescuers showed Angel, she was always fearful around them. For the rescuers, this is a sign of trauma and abuse. However, they didn’t give up on Angel.

Over the next few months, Angel started to come out of her shell and began to trust humans again. It all started when the organization rescued another lurcher where Angel was found. The two dogs were introduced, and the other dog, named Cliff, showed Angel that it was ok to trust humans.

Angel followed Cliff’s lead and eventually started to trust humans enough again that she allowed them to touch her without being afraid.

Thanks to the tireless staff of PAWS Animal Rescue organization, Angel became a trusting dog again, which allowed her to be ready for a forever home.

Eventually, Angel became a happy puppy and found a forever home where she’s sure to be loved and cared for by her new human parents.

When Michael and Theresa McGrath saw Angel’s video on the internet, they knew that they wanted to adopt Angel. They took their dog Jaego along to meet Angel and sure enough.

Although Angel was a little reluctant when she met her would-be adopters, she eventually knew that they were good people and warmed up to them after a few seconds.

Michale and Theresa adopted Angel and even gave her a new name. Now called Cara, she is now living a happy life with her new parents and new dog sibling.

Here’s a video showing Angel’s transformation from being an untrusting dog to a happy and trusting one named Cara.