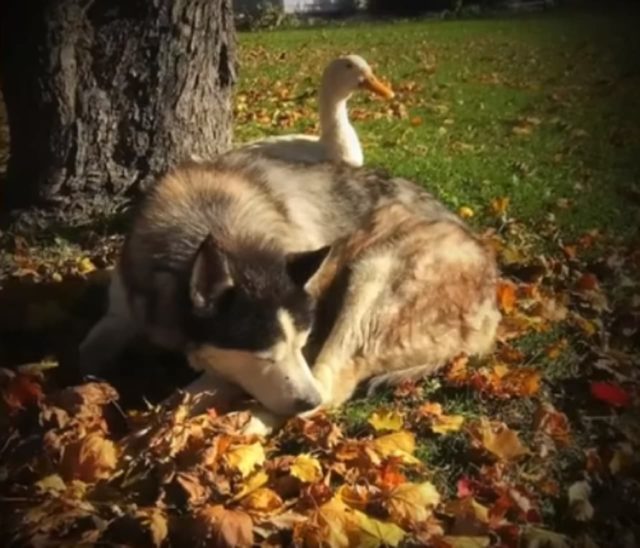 In this world full of prejudices, it’s hard to find a true friend. Modern communication methods allow people to strike a conversation with each other quickly. However, turning that conversation into a long-lasting friendship is no easy feat to achieve.

But, a particular Husky in Minnesota teaches us to set aside one’s biases to create a lasting friendship with an adorable duck.

Somewhere in tiny Strout, Minnesota, one can see an unusual pair of animals trotting along Highway 28. Most of the time, this rare sight attracts the attention of motorists who pass by, prompting them to stop driving and take a picture with them. These local stars, a twelve-year-old Husky named Max, and a four-year-old duck named Quackers, started their journey together in the most unlikely way.

When Max’s best buddy, Sasha, passed away, the dog’s left alone without a friend. However, all these changed when Max’s fur parents brought home a cute duckling they eventually named as Quackers.

Let’s go on an adventure, bud.

As Patrick and Kirsten Riley relay, the two did not immediately interact closely during their first meeting. While Quackers remained inside his warm pen, Max stayed beside the enclosure all the time.

However, when Quackers finally went out of the enclosure, Max continued to stay by his side. From then on, they do everything together. Whether it’s sleeping, eating, or taking some walks along the highway, they make sure to accompany each other. But, the pair’s oblivious to all the attention they’re getting. As Max and Quackers go their merry way, motorists stop for a bit and send pictures to the Rileys along with positive comments.

Though Max’s no longer young, the fantastic friendship he made with Quackers made its mark in the hearts and minds of their fur parents and neighbors.

If you wish to view the animals’ beautiful story, take a look at the video below.